I don’t know how I got so lucky in the love department but I hit the jack pot, seriously I am truly blessed.

It amazes me, I wish that everyone could be this fortunate in this department.

So we just had our anniversary, its been a long time but it feels like its just flown by.

My sweet husband isn’t a big social media person, he doesn’t share a lot but he always sends me a song on our anniversary, sweet no?

So he sent me this song and wow, this just makes me happy!

So happy that I had to share so enjoy…

If you haven’t found the person your meant to be with, that person that you’ve probably spent many other lifetimes with and will spend forever with then I wish you nothing but the best in your search…there is someone out there for everyone, loads of fish in the sea…

Ok here is the song, its so beautiful!

I just read this article and it really is fascinating.

I agree with the assertion that empathy and how much of it one expresses all boils down to a choice, I don’t believe it is innate.

I’m sharing the article below and I would love to hear your thoughts on this, anyone who cares to share…

I’ve encountered a few people in my lifetime one that I believe to be a complete Narcissist, and possibly a Psychopath as well, this individual certainly has displayed Psychopathic behaviors…I’ve literally seen how cruel and evil this individual chooses to be, then there is this big facade put on like they are this pure righteous devout Christian, confusing no?

It all boils down to choices doesn’t it!

Do you ever find yourself asking that question? Like so what’s next, what exciting adventure or enormous challenge is lying in wait behind the next bend for me?

This isn’t my couch but I would love to find one like this and try to restore and re purpose it!

So evidently Kris and I are now furniture upholsterers…yeah that’s right, exciting no?

So our couch was a little too big to fit down the stairs into our basement and I wanted this particular couch to live in our family room which is downstairs.

It happens to perfectly match this armoire that we have that used to live in our bedroom. See what I mean everything is being moved around and re purposed.

I can’t remember exactly but I feel like I always intended for the armoire to go in the family room and how it ended up in our bedroom is a mystery to me, I have no doubt that at the time I thought it was a brilliant idea, now it is living in the family room and houses a tv and all that stuff, the tv accoutrement, and it also has three big lovely drawers which will be a nice place to keep DVD’s and games and all that.

The drawers that’s probably why it ended up in my bedroom I wanted to use the drawers, probably…

Anyway, so we couldn’t get the couch down the stairs and it was like an old fashioned comedy watching us try.

My oldest and my Husband tried every way possible with me helping where needed…it was hilarious at one point I was totally boxed in by the couch against the door, good thing I don’t have that thing where people flip out in small spaces.

Ok so it just wouldn’t fit so we took it apart.  We removed the cover thing on the bottom and took out all the little nails and tacks and removed some of the inner workings, basically we got it so the back kind of folded down a little.

So my Husband had to take a saw and literally cut off the corners of the back! It will be fine, we will just reattach them with brackets and recover the fabric and fluffy stuff that was already there but this all seriously was not something I ever thought I’d be doing.

We got it down there and when we were putting it back together one of the springs basically exploded from its little metal bracket that attached it to the frame and smacked my Husband dead in the eye, ouch!

So now he has a black eye from that and probably looks like a battered husband.

It all worked though and its not quite done but close and now we can add amateur furniture upholsterers to our resumes…lucky us!

Its all good though because I’ve always been curious about this and now if I see a cool old chair or something at a thrift store or a yard sale or something I won’t hesitate as much, maybe I will just try this again.

If I do it will be planned however and not how we ended up in this instance as I am pretty sure we didn’t need to take it apart as much as we did, we choose the hard way or just didn’t think it through as well as we could have but whatever, its all good my living room sofa is now my family room sofa and it all works! 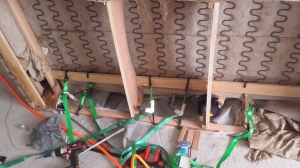 Does that look complicated enough? In the factory they have a big machine that sets those coils, this was our system, it worked though!

Have you ever had anything like this happen? How did you handle it?  Have you ever upholstered furniture? Were you taught properly or did you wing it like we did? There aren’t a lot of You Tube videos out there to help it really is a lot of winging it…share with me your own adventures in furniture arranging, re purposing, upholstering, etc….

I want to thank everyone who has reached out to me with concern, I truly appreciate it and I am eternally grateful.

Its always nice to know that people care.

Everything is explained in the private discussion/support group so if you really want to know deets shoot me a PM and I can send you a password.

To obtain a password I just need to verify that you don’t have nefarious intentions and are who you say you are…well not even so much that I don’t care if anyone uses pseudonyms, I get it its for online protection…no I just need to make sure your not a Troll up to no good.

For those who’ve been contacting me with concern and aren’t part of the discussion group and don’t want to be, and are concerned and sending me PM’s nonetheless, everything is all good and we’re happy, healthy and safe.

Yes I did notice the threat, and no I am not afraid of any of those individuals who are involved.

Yes the appropriate people and agencies have been notified and consulted.

As far as whats next…that you would need to be part of the private group to find out but please be assured its all good.

Some people are just terribly misguided, mean, dishonest, on and on, fill in the blank. I don’t know why, it just is what it is.

So yeah, whatever, good luck to those people on their journeys in life…what else is their to say?

Ok so I hope this clears some things up and answers some of the questions that have been flying about.

Thank you for the messages of concern, they didn’t go un noticed.  My hope is that this post acts as a blanket response to all so please don’t feel ignored if I didn’t respond directly, I’ve just been really busy lately.

So everyone have a wonderful day and no worries!

You know what I think I’ll throw in a song because why not? I love this song, it makes me happy, reminds me of my favorite person in the universe and how loved I am…its a good song!